Corporate events for everyone 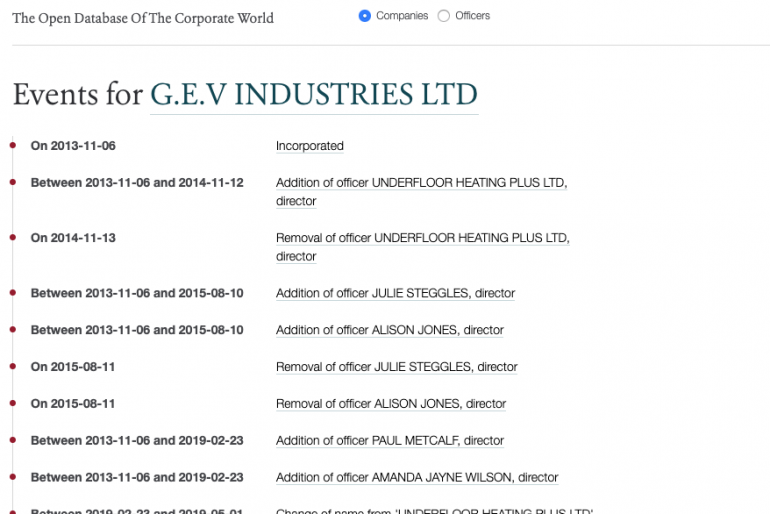 We’re proud to announce that we have now released the first public release of OpenCorporates’ new corporate events system. This has been a really substantial project that’s been more complex and more difficult than we expected, and threw up many issues and questions along the way.

But what we have now is a big step forward for OpenCorporates, and, we believe, ultimately the world’s understanding of companies.

That’s all very good, and there’s more to come (see below), but we blogged about this way back in early 2018. Why has it taken us so long to put this into production, and release it? Two main reasons: first, our engineering approach took longer to implement than expected; second, along the way we encountered a lot of unexpected challenges that we had to overcome. We’re going to detail both of these, together with some lessons learned.

When we created corporate events, the question was whether to implement it as part of the OpenCorporates main application, or as something external.

We quickly decided upon the latter, for a couple of reasons:

But as anyone who’s implemented microservices systems knows, it’s no silver bullet, and to a certain extent you are trading one type of complexity for another (albeit one that’s more clearly defined and whose components are easier to work on). For example, how things are transferred from one part of the system to another; dealing with hard-to-find bugs, including race conditions and other synchronisation issues; bottlenecks; and visibility within the system as a whole.

In addition to this, we also faced a number of other issues, including:

Throughout the development work, we’ve been working with existing users and clients, both bulk data and API, and this has given us essential feedback on the design and delivery of the events.

As we mentioned above, we’re not finished with Corporate Events. Over the next 6-12 months we’ll be iterating them further, including:

There are also a bunch of snags that we’ll be fixing over the next 2 weeks.

We’ll be blogging shortly on the underlying data model and concepts behind corporate events – heads up, it’s going to be pretty nerdy, but will be interesting reading for those of us who love this sort of thing.

Available now on the website (you must be logged in to see them – it’s free), and via the API or as bulk data, free for public benefit users (journalists, NGOs, academics). As ever, feedback welcome.

This project has received funding from the European Union’s Horizon 2020 research and innovation programme under grant agreement No 732003, euBusinessGraph, an project that aims to create a crossborder knowledge graph of companies, and a set of innovative business products and services build upon the knowledge graph.

This article has first been published on opencorporates.com

You can find out more about which cookies we are using or switch them off in settings.

This website uses cookies so that we can provide you with the best user experience possible. Cookie information is stored in your browser and performs functions such as recognising you when you return to our website and helping our team to understand which sections of the website you find most interesting and useful.

Strictly Necessary Cookie should be enabled at all times so that we can save your preferences for cookie settings.

If you disable this cookie, we will not be able to save your preferences. This means that every time you visit this website you will need to enable or disable cookies again.